E-cigarettes have gained popularity over the last few years, but are they safe?

E-cigarettes generally work by heating up a cartridge of liquid nicotine, vaporizing it and creating a cloud of vapor that looks like smoke when exhaled. There is no actual tobacco in e-cigarettes; however, the nicotine in e-cigarettes is addictive just like in conventional cigarettes. Some studies have shown that e-cigarettes contain formaldehyde, a known carcinogen. 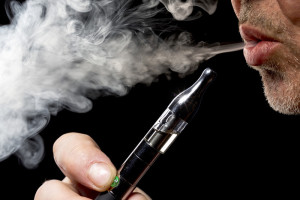 There are some studies showing that e-cigarettes may be healthier than regular cigarettes; however, keep in mind that e-cigarettes are not FDA-approved and they have not been around for long enough to fully understand the risks behind their use, especially over the long-term.

With all this mind, if you don’t smoke cigarettes, don’t start using e-cigarettes. If you’re trying to quit smoking, talk with your doctor about FDA-approved methods to try instead. If you are not planning on quitting, e-cigarettes might be a healthier alternative to traditional cigarettes, but as stated before, there is still too much we don’t know about e-cigarettes to be certain of that.