Do I Have COPD or Emphysema?

There is so much confusion when it comes to defining COPD, so let’s try to clear it up for you. According to the World Health Organization, Chronic obstructive pulmonary disease (COPD) is a lung disease characterized by chronic obstruction of lung airflow that interferes with normal breathing and is not fully reversible. The more familiar terms “chronic bronchitis” and “emphysema” are no longer used, but are now included within the COPD diagnosis. Other diseases that fall under the COPD “umbrella” are bronchiectasis and refractory asthma (chronic, difficult to control).

Let’s break them down:

Chronic Bronchitis causes the following changes to occur in the airways: increased mucus production, swelling and constriction of the smooth muscle that surrounds the airways. 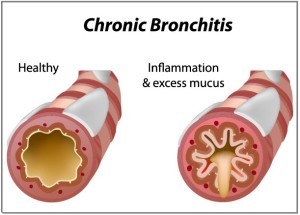 Emphysema is a lung condition that causes the air sacs in the lungs (alveoli) to become damaged. Over time, the inner walls of the air sacs weaken and rupture — creating larger air spaces instead of many small ones. This reduces the surface area of the lungs and, in turn, the amount of oxygen that reaches your bloodstream.

When you exhale, the damaged alveoli don’t work properly and old air becomes trapped, leaving no room for fresh, oxygen-rich air to enter. 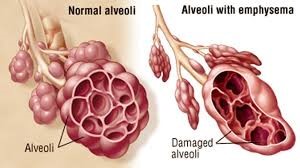 Most people with emphysema also have chronic bronchitis.

Bronchiectasis(brong-ke-EK-ta-sis) is a condition in which damage to the airways causes them to widen and become flabby and scarred. It is usually the result of an infection or other condition that injures the walls of your airways or prevents the airways from clearing mucus. Your airways slowly lose their ability to clear out mucus, which then builds up and creates an environment in where bacteria can grow. This leads to repeated, serious lung infections. Each infection causes more damage to your airways. Over time, the airways lose their ability to move air in and out. This can prevent enough oxygen from reaching your vital organs. 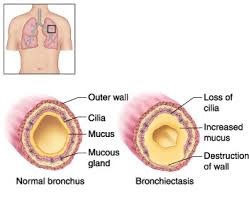 Chronic or Refractory Asthma Another frequent component of a COPD definition is refractory asthma, meaning asthma that is nonreversible, which differs from most forms of asthma. Some forms of asthma can be nonreversible and mimic emphysema. The following chart shows the differences between asthma and COPD but it is important to note that long-untreated asthma can become a chronic condition that has caused irreversible lung damage. 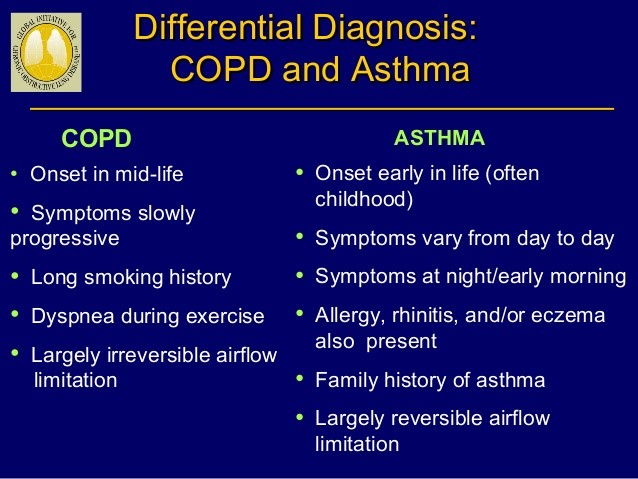 This was meant to be a brief overview of chronic lung diseases only. If you are unsure of your diagnosis or need more information, please contact your physician.